I am really enjoying my time here. The area is just beautiful and I am so excited to travel and explore the country. Excavating is tiring, but very rewarding and I am finding that once getting into “the zone” I can just keep going and completely lose track of time! 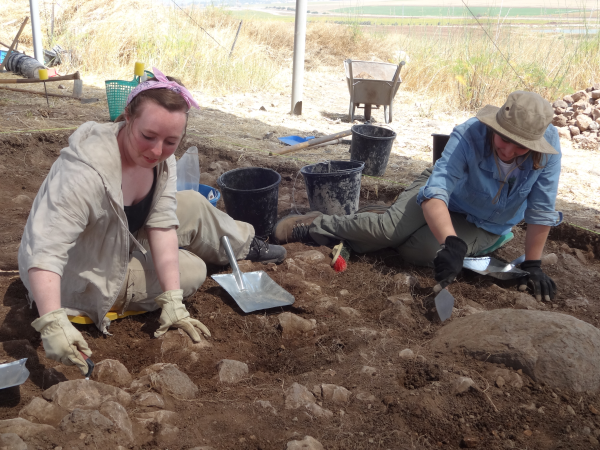 It’s exciting when you find nice pottery and artifacts, and very gratifying when you’re able to spot the difference between dirt-encrusted, man-made objects and the seemingly endless supply of rocks on the site.

Already, we have been here almost a week and I cannot believe how fast the time has flown. I am so excited to see our site develop over the remaining three weeks of excavation and also to see what other adventures are in store for our time in Israel and Jordan. I can hardly wait!

Israel is an amazing place! Surprisingly, it is not too hot. Actually it is quite cool in the mornings and when the wind picks up. Being able to watch the sunrise everyday has been a magical experience.

The flowers surrounding our trenches are beautiful.

It is the most exciting feeling to find artifacts; digging is a new adventure everyday.

Before I left for Israel, I just wanted to go to the beach and watch the sunset. Instead I was watching the sunset from the seat of an airplane. After being up over 24 hours with very little rest, I arrived on the Kibbutz, meeting several new people. We said goodnight and prepared for a 4:00AM wake-up call. We slept in until 4:30AM and waited at the bus stop by 5:00AM to start our day. Being mine and many others first time to Israel, Norma took us on a tour of Tel Jezreel. As we learned the history we slowly descended down to the work site, but not before we could witness something majestic.

Back home the only time I am awake at 4:00AM is from studying or traveling. I’ve seen the sunrise a few times, said “that’s pretty” and moved on. Something was different in Israel. As the sun rose around the mountains, the misty valley below became clearer. It was very surreal knowing that as I watch the sunrise and usher in a new day, back home was closing their eyes for bed. The view was beautiful and as Norma spoke you could almost imagine the history unfold as you looked down to the valley.

As we continued, we were introduced to the worksite from last year as well as our site for this year. Still in its early stages, I am super excited to see what our efforts will reveal.